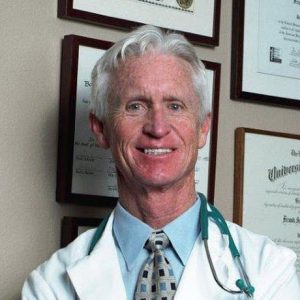 Frank Shallenberger, MD has been practicing medicine since 1973 and has been a pioneer in alternative/integrative medicine since 1978. He is one of only 16 physicians in Nevada that are licensed both in conventional medicine as well as alternative and homeopathic medicine; allowing him to integrate the best of both approaches for optimal results.

Dr. Shallenberger has revolutionized the practice of anti-aging and preventive medicine by developing a method to measure mitochondrial function and oxygen utilization. He has written two popular books describing this method, The Type 2 Diabetes Breakthrough and Bursting With Energy, and has authored numerous papers in the international peer reviewed literature on ozone therapy and oxygen utilization.

He is also the editor of Second Opinion alternative medical newsletter.

He is the developer of Prolozone®, an injection technique that has been shown to regenerate damaged joints, herniated discs, and degenerated joints, tendons, and soft tissues. He published the first paper on Prolozone Therapy in the Journal of Prolotherapy entitled “Prolozone –Regenerating Joints and Eliminating Pain”.